RECENTLY A GOAN BJP MLA , SHOWS HIS MATURITY AND COMPASSION TOWARDS THE NGO

Street Providence > Updates > RECENTLY A GOAN BJP MLA , SHOWS HIS MATURITY AND COMPASSION TOWARDS THE NGO

30.12.2022. 7Pm IST
Recently a Goan BJP MLA , shows his maturity and compassion towards the NGO & understands the works of the NGO inspite of a huge misunderstanding and miscommunication.
Mr PREMENDRA SHET IS THE BJP MLA FROM MAYEM CONSTITUENCY , North Goa and our NGO was  getting angry with him over an man from his constituency who is admitted  in our shelter Home.
Our anger caused us to use language not fit for an elected representative and we even one day asked the police to get involved.
Today,  our Manger, Mr Sapnesh Salgaonkar & myself,  met the MLA & apologized to him even though he did not make it an issue.
Well 2 years ago Mr PREMENDRA was a panchayat member and there was this goan man who was suffering from  chronic mental disabilities and was a big nuisance in the village to the extent he would be beaten up as he was disturbing the locality .
Mr Premendra as a panchayat member  having concen for the man some how over the phone requested us to rehabilitate the man and we obliged and one day , late evening dropped the man in his car to be rehabilitated.
Since it was Covid period,  we took him in on humanitarian grounds and we were told that his mother is old and they are really poor.
But despite medication, care and rehabilitation efforts, when there is no   improvement in the person after 2 years, we get frustrated and upset.
We called this  ” the panch member ” and asked him to send his family to meet us or we tell the ” panch member ” to take the man home,  etc.
And we are not telling him in peaceful way but we are very upset and aggressive as its a case to us of ” MAN DUMPED to LIVE IN A SHELTER HOME all his life ” which I am totally against.
Incase something happens to this man in our shelter Home and if he has family who is responsible?
These were our concerns and we are upset that the ” panch member ” is not helping us and is not calling us in the way he was calling us 2 years ago before we admitted this man.
Today running an NGO , one needs to be very careful especially where rehabilitation is being provided  free   and when admissions are done by powerful people who can just make things uneasy for the NGO .
Well 7 days ago it dawned on my Manager that the ” panchayat member ” is now the elected MLA of Mayem constituency as we received a request on paper but this time from ” THE MLA OF MAYEM “.
We put things togther and realized that the
” panch member is now MLA “.
I calls his secretary asking for an appointment and told the secretary the status of the misunderstanding.
Usually the Secretary of an MLA acts like he is the MLA .
His Secretary was more humble than the MLA & Said to me ” MLA is not upset with you, we all make mistakes “.
But no appointment was given.
This morning I called the MLA and told him I am coming to meet you for just 5 mins which he agreed.
We spent 45 minutes in his office and till we left his office and after asking the MLA 3 times
' why did he not tell us you are now an MLA ” as we were really angry with him , the MLA just smiled and said nothing to that query .
The MLA is BSC graduate from a very humble background and being educated he is surely aware of the troubles involved by NGOs taking care of poor people with disabilites free of cost .
One thing I can say with guarantee ” what ever the MLA assured help to our problems regarding our poor goans suffering from disabilities especially from rural Goa , he will stand by it and get it addressed that includes raising these issues in the upcoming assembly sessions “.
Very often you see and hear of harassment meted out to NGOs but here in Goa , the communal harmony is so strong which THE MLA OF MAYEM has lived up to  and I feel ashamed of my attitude towards the MLA .
But at times the frustration is so high especially when we don't know whom to contact in case of emergency .
I had to get this uneasiness and feeling away from me that I have behaved unprofessionally with an ELECTED MLA  before we end this year as we need to enter the NEW YEAR with solutions to problems faced in Goa by the poor rural goans suffering from mental disabilities and  no free shelter homes for such poor people suffering from mental disabilities.
At the end of the day, all I can say is that
” Mr. PREMENDRA SHET is a true gentleman 1st and politican 2nd “.
All the above facts can be verified with the MLA.
Www.streetprovidencegoa.com
God bless you all
Donald Fernandes
8380097564 / 7020314848
Awarded the Best NGO for the year 22-23 by
The Government of Goa 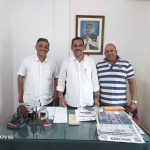