23.11.2022. 7pm IST
If you are concerned about how and why people go missing or are taken advantage by unknown elements on the streets then this will shed some light to understand.
Read slowly
Today we accepted a young goan married abandoned lady having medium physciatric issues.
This young goan lady and her elder sister both married husbands who are not from Goa .
Father expired and looks like they have no own house in Goa.
Two years back this young goan lady husband went back to his village, put his phone off and has just disappeared.
Mother & this young girl stay in the brother in laws house.
But due to this failed and abandoned marriage this young goan lady has gone into mental stress and developed some mental disabilities.
Her sister and her husband are steady with small jobs.
Now,  it can be this young lady is frustrated and keeps hitting the mother , threatens to kill her , runs away from the house,  roams the streets.
Police have been  picking her up quite often and calls the brother in law who has tried endlessly to help her, both by taking her home and trying to get her to take her medication.
Few weeks back late night I received an SOS from a PSI who was too frustrated trying to help this young lady as she was violent,  aggressive and uncontrollable and was burnt on her one side due to roaming and sleeping on the streets in panjim .
I myself got her admitted with her mother into IPHB late night and assured that she will be taken into our shelter home.
The sister and her husband have small child and the child gets very frightened of this young lady once she starts  getting out of control.
Such unruly behavior can cause alot of mental trouble to this small child and I have seen such small children living in the same home with such violent ladies developing mental characteristics.
Now this is where we step in .
The sister & her husband just are not ready to take her in as they have reached a limit.
If WE were not aware of this case surely this young goan lady would either be back on the streets, again might be harrased and taken advantage off or surely would just start walking to no where or board a bus or train and reach anywhere out of Goa.
And who is responsible ?
Who will you and i blame ?
Who will search her ?
Such cases are daily being reported to our NGO either by the Police or through the government hospitals primarily of our own local goans who the own family members can't take care off due to financial constraints.
In 9 to 12  months this young goan lady will be such a changed and renewed person with her medication that no one including her sister will belive that she is the same lady .
Our service is primarily catering to such poor, abandoned, unwanted people ( primarily goans ) suffering from all types of mental, physical & intellectual ( if we can manage) disabilities.
So next time you come across in your vicinity such cases please advise them to see a doctor and start administering medication to the patient.
If rehabilitation is required we can surely help as such cases take time to recover and a clean ,  peaceful and loving environment is the only solution.
I am saying again and again , there is a big crisis building up due to mental disabilities and more & more local Goans are reaching the streets and becoming homeless and then just disappear.
All Government departments like Police , Health , Women & Child , IPHB ,  along with NGOs who fight and ahout about Women related issues need to come togther ASAP .
Government grants to such shelter homes like ours,  need to be released in time otherwise no one will be able to rescue, rehabilitate and take in such abandoned homeless poor Goan women ( & men ).
♡♡♡ Big thanks to entire Doctors @ IPHB Bambolim for all the good treatment they give to such poor abandoned people and the interest the institute takes in admitting and treating such cases .
God bless you all
Donald Fernandes
8380097564 / 7020314848. 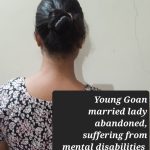