19.11.22. 7 PM IST
Another poor  Goan elderly man Mr James from Vidhya Nagar Margao admitted into our Shelter home.
https://fb.watch/gUGSBP1dVC/
♡♡ Big thanks to Mr SHEIKH ZEMIR , a lab assistant from New English School for helping James get off the streets.
And not to forget Mrs NICOLE from BORDA who actually was the main person behind JAMES getting off the streets and who even bought that wheel chair for him .
Well JAMES is a stubborn bachelor with a big attitude and was just living in pathetic condition outside the residence of MR SHEIKH ZEMIR in VIDHYA NAGAR , Margao
For over 15 days people  would give him food and he was just there on the road.
Nicole was kind enough to buy and give him a wheel chair and he would be living on the wheel chair for many days.
About 2 weeks ago,  James was so bad that SHEIKH ZEMIR moved him to District Hospital Margao and got in touch with me through whatsapp only and we advised and guided him the procedure which he followed.
Continously last few days , ZEMIR has been following up with me and updating me strictly through whatsapp only .
I mean who will go out of their way daily to keep track of a poor old unclean homeless man .
Anyway today JAMES was discharged from DISTRICT HOSPITAL Margao and we admitted him into our home .
He can't even stand but demanding to be left on the streets as he does not wish to stay in a home.
I mean see the attitude.
We require more people like SHEIKH ZEMIR in GOA to help such homeless people get off the streets and into hospitals without we getting involved.
There are huge costs and alot of time involved in rescuing homeless people which is next to impossible for us at times for each and every request .
James legs had swollen up , wounds with pus , weakness coupled with diabetes.
It's going to be tough caring for him as he needs daily dressings plus his diabetes needs to be controlled.
Like I said In my posts few days back ” the poor  goan people reaching the streets and turning homeless is increasing “, which is people like James.
Lots needs to be done quickly before things get out of hand.
♡♡♡ Big thanks to District Hospital Margao for admitting,  treating and helping James in the these few days and not discharging him without informing SHEIKH ZEMIR .
Actually government hospitals are the places where most of the homeless can be rehabilitated and cared for .
Government needs to think seriously how to solve the homeless especially the local Goans living on the streets due to various reasons and to link such homeless people to shelter homes.
Once again if you see such homeless people in Goa pls contact the local police station and send me details through whatsapp on 8380097564.
We operate strictly through whatsapp only for everything and anything on 8380097564 so please avoid calling.
God bless you all
Donald Fernandes
8380097564 / 7020314848 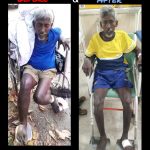