13.11.2022. 7pm IST
STREET PROVIDENCE GOA runs as of date, 8 shelter homes for the homeless and for the people with all types of disabilities with a total capacity of 200 people.
As of date we are taking care of 150 such homeless and people with mental disabilities.
☆☆☆ ” 2 Sheets attached in compressed form “.
All types of people with all sicknesses are taken care for in our homes including HIV Men & women.
It always looks to many out there that mostly the homeless are OUTSIDERS / NON GOANS .
But in our shelter homes 60% are Goans and that's the most sad and shocking part .
And the no of poor Goan people knocking on our doors is rising and thats a big concern.
Old aged Homes cater mostly to those who pay the fees or those who come from families.
But the poorest of the poor who are just homeless reach no where besides the streets and finally end up in our shelter homes .
Last week we rescued and took in a Goan mother and son who is studying in Std 10th who have been living on a street/ bus stop for over a year .
Coming week we have a Goan husband and wife who actually have no Home of their own being rescued and taken into our homes.
In the coming years there is going to be a BIG BIG ISSUE with poor goans turning homeless and just reaching the streets.
It's a social problem caused due to :
☆ Price rise
☆ Inflation
☆ Unemployment
☆ Alcohol
☆ Compact families who don't or can't look after the parents
☆ Sibling having mental issues and no one to look after and administer them their daily medication.
Life is changing and it's changing fast due to the urbanization and commercialization.
Another big worrying issue is ” old aged Homes are plenty but man power is a big issue plus the price rise making it impossible to take in the homeless free of cost “.
So basically the homeless and the poor are increasing but going no places besides the streets.
We too at times feel the heat as expenses are rising and donations are gradually slowing down but then some NGO has to take care of the homeless and the poor with disabilites and that is STREET PROVIDENCE .
Everyday we ask for God's Grace and favour to rescue & rehabilitate the poor homeless street people and those with mental disabilities.
Benefactors have been very supportive and thats the beauty of our rehabilitation program.
The Government too has been supportive through various Departments and we appreciate the support given silently but consistently.
At our shelter Homes,  we take in all types of homeless people irrespective of the sickness and the disabilites.
Very rarely we refuse admission and even if refused we try to adjust later once treated either at the District Hospital or at the IPHB.
Caring for the homeless is the most difficult task as all come with various complicated sickness and diseases and this program of our ie rehabilitation is a success only due to TEAM WORK & THE STAFF who work silently and systematically day in and day out .
With close to more than 19 full time staff including 7 drivers it's a mammoth bill to pay at the end of the month towards Salaries.
It's going to be Christmas Season very soon and it's the time of the year when gifting and donations reaches a peak.
♡♡ Please do support us ( no clothes please ) in any way you can.
Very soon our capacity will touch 200 homeless poor people and we will need your help through donations / blessings/ prayers & support.
God bless you so much
Donald Fernandes
8380097564 / 7020314848 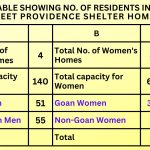 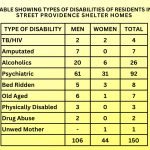