26.8.2022. 7pm IST
♡♡♡ PSI Mr Sanket a young and dynamic officer @ Goa Police , Panjim Police Station permanently ended the misery and agony of a man who for close to 5 years has been taking off his clothes and roaming naked across various cities and states in India, by only making one phone call to me yesterday.
Imagine you see a fully naked man walking on a road in panjim city ?
What will you & I conclude ?
He is mad / unsound mind / crazy / lost his mind
What will be yours & my  reaction be ?
☆ Abuse him
☆ Chase him
☆ Make fun of him
☆ Throw stones at him
Then May be call the police .
What will police do ?
Put some clothes on him and either
☆ 1. Take him to the mental hospital or
☆ 2. Put him in a train and get him to no where.
If they put him in a mental hospital they require a tedious paper work which is called a Magistrate order ( MO ) & once say after few months of treatment, once okay the mental hospital will / might ask the police to take him away.
But where will the police admit him for rehabilitation?
Or he might just be there in the mental hospital for a long time.
So that's how the system is .
Cruel / complicated / no co ordination between various departments as rules are thrown in your face .
Well yesterday I had an opportunity to be part of this naked man life all because one police officer Mr Sanket called me asking if I could rehab this man .
I asked Psi Sanket his other options which he said one of the easiest one was to put him in a train and send him away from where he came.
Man is educated and is 12th standard but last 5 years has been hit by this sickness where he claims some voices / spirits hit him when he is alone and that makes him take off his clothes.
He is doing it Sub consciously .
He says he would walk 30 to 40 kms daily just moving endlessly and meaningless .
He says all night he stays awake naked as that spirit irritates him if he does not take off his clothes & then he can't get sleep, resulting in mosquitos bitting him and the abuses and stones thrown on him .
I have a couple of such men some from Goa who are in our home with the same complaints that people have thrown stones on them due to their mental sickness.
Anyway he can't be put on Train and sent city to city.
Yeserday 10 pm I take the homeless man with the Police as support and explain the matter to the Doctors at IPHB.
My care givers found it difficult to handle as he kept speaking about spirits and blood.
IPHB Doctors were considerate enough to admitt him and I have personally assured to rehabilitate him in our shelter Home on his discharge.
The junior Dr last night at IPHB inquired whether he wanted to get admitted or just walk away .
At that moment my heart skipped a beat .
Here its 10.30 pm , I have disturbed my sleep to help this man and the young Doctor is literally giving him an option of just walking away.
1st of all I am short of patience and God only knows why the man Said ” I want to get alright please admitt me “.
Both the junior doctor & the senior doctor asked the man ” why have you come to Goa for the 1st time “.
If PSI Mr Sanket had not called me, the evil plan would have succeeded and this man would be in the same pain & agony of roaming naked, city to city , state to state , getting stoned and abused.
We live in a world full of glamor and fast life and we ignore this section of society .
Imagine or just visualize if it's your own family member how you would cope with it ?
Would you manage to take care of the sickness or would you abandon the family member ?
That's when reality strikes us .
We need to reach out the lost .
I am seeing , getting , rehabilitating many many such cases and it's rising fast, where family members really can't help their own loved ones due to financial stress and family issues.
So the next time you see any naked people roaming on Goa, please don't walk away.
Stop and see how you can help them.
These type of people require your presence of mind and your compassion to get out of the agony and sickness there are going through.
Call the local police station and let me know through whatsapp on 8380097564.
We will do the best we can @ Street Providence to get that person out of their misery permanently by getting them admitted into the mental hospital and then free rehabilitation in our shelter homes.
We provide FREE care and compassion to the homeless street people @ Street Providence, Goa especially to those suffering from mental disabilities.
We would not be here today at this level without our benefactors and various Government departments like :
☆ Goa Police ,
☆ IPHB  & GMC ,
☆ Directorate of Health Services ( DHS )
☆ Women & Child Department
☆ The State Commissioner for Persons with Disabilities.
All the above play their part in solving our problems and the problems of the homeless.
The day Social Welfare Department accepts our NGO and understands the issues of disabilities on the streets faced by the homeless, that day I will be at peace .
Once again please support our NGO in whatever way you can.
Please contact only thru WhatsApp messages on 8380097564.  Strictly no calling .
God bless you so much
Donald Fernandes
8380097564 / 7020314848 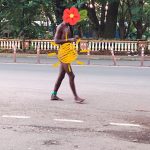