20.8.2022. 7pm IST
A middle aged , divorced & abandoned lady, with an unsound mind , living on the streets some where in Pernen Taluka , today finally got off the streets, permanently.
Actually the lady is abandoned both by her own family and her married family and it can't be worse than anything else to be unwanted In no family.
♡♡♡ Thanks to the Inspector of Pernem @ Goa Police, Mr Dattaram Raut and his team for understanding this particular matter & moving in quickly .
It all started yesterday at 2 pm at Pernem police station when Adv Shailesh Gawas , social worker spotted this lady right in the vicinity of pernem police station & called me .
Without even I asking for the lady picture I knew who the lady was .
Two months back I was briefed about the same lady by another lady who saw her plight and tried to help her but some how the police I assume did not take much interest due to the below reason.
The lady is married, having a child but divorced and husband I am told has taken custody of the child and living with the child with a court order.
Naturally it will lead to depression.
This lady is sitting at bus stops , loiters at the local school, sleeping on the streets & at times sits outside the relative house but just does not talk much .
A couple of times taken to IPHB Bambolim treated and again back on the streets.
Agony and misery .
After treatment such Cases need to go to shelter homes but there are no FREE Shelter homes for Pwds except Street Providence.
The private shelter homes start at Rs 20000 a month.
Nor are they any government mid way homes for such poor people with mental issues.
Yesterday too , after I spoke to Inspector , on humanitarian grounds,  a police personal,  this lady & the relative reached IPHB.
Examined, given medicine & sent back, as IPHB will not admitt without an attendant & the lady is divorced and abandoned so no one is going to put their neck out .
Its like IRRITATING to even know that the lady will be back on the streets and that she is not going to take that medicine but still RULES are shoved in your face.
Having handled 100 's of such cases, I gave a plan to our manager Sapnesh who got in touch with LPSI Mrs Samedha @ Pernem police station.
Simultaneously we requested the Dr @ UHC Tuem to do the medical and get the patient sent to IPHB & explained the plight of the lady.
Superb co ordination and understanding among the Pernem Police station & UHC Tuem Doctor
Hats off to them .
This morning :
☆ Medical done at UHC , Tuem ,
☆ Magistrate order ( MO ) Procured ,
☆ Admitted into IPHB
Also thanks to IPHB for admitting the lady into the institute.
Once treated and stabilized, police will discharge and bring to our shelter home.
Relative by then will be making an AFFIDAVIT stating that he has no objection to admitt in a shelter home .
What did not happen for months & a year ,  happened  fast 24 hours .
This is how system and co ordination between government departments have to be .
I feel at peace that sitting with my phone and using the goodwill our NGO has generated over the years , Government officials are taking interest and helping such abandoned mentally challenged people on the streets to get a better life .
I just don't talk but our team works daily across Goa helping many such mentally challenged homeless people get off the streets and into the IPHB for treatment.
This post is to create an awareness that Goa Police , the DHS & IPHB are doing a wonderful job in helping and treating so many such mentally unsound people on the streets and finally we care and rehabilitate them in our ever increasing shelter homes across Goa .
You too can help a homeless person with mental issues in Goa to a better life by contacting the local police station and also by getting in touch with me strictly through whatsapp on 8380097564.
To bring down the different Crimes against homeless women, shelter homes are the need of the hour .
God bless you all
Donald Fernandes
8380097564 / 7020314848 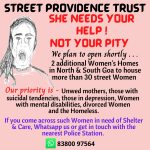