CONGRATULATES Sr FATIMA RODRIGUES , ON BEING re ELECTED AS SUPERIOR GENERAL OF FMCK CONGREGATION

7.8.2022. 7pm IST
STREET PROVIDENCE GOA congratulates Sr Fatima Rodrigues , on being re elected as Superior General Of FMCK congregation for another term.
For those who must be wondering who, why , how is FMCK & Street Providence connected well read on .
FMCK is a religious congregation of sisters / nuns which runs educational institutes,  old aged homes etc in Goa, and other places in India.
In June 2018 , FMCK collaborated with our NGO and togther we started a women home for the homeless street women .
Usually a religious institute tying up with a small unrecognized  NGO is not heard of.
But it was due to Sr Fatima ( who was the Suprerior General ) and Sr Vandana ( Provincial )
which made this project possible.
The home for the homeless women is still functioning.
Late 2018 , FMCK gave us a home in Cavelossim to use for homeless men.
Till date this home is operational looking after 30 street and homeless men .
Sr Fatima stays at Old Goa and their convent runs our food bank fridge right from early 2018.
This is the one of the few fridges which is daily receiving food and daily feeding quite a no. of poor people in that area.
Again due to the support of Sr Fatima who keeps an eye on this fridge.
Kerala flood  in 2018  , Old Goa Convent of Sr Fatima was a big collection,  packing and storage place for our food bank for the relief material which went to Kerala.
Covid 19 , first and second wave,  Sr Fatima and her team of nuns and apostolates stored , packed and delivered close to 2500 kits of dry ration , each kit worth rs 1000.
I remember the crowds gathering outside her convent begging for dry ration and Sr Fatima did a fantastic job of giving away these kits only to the poorest of the poor .
( Infact during the Covid 19., both waves, our food bank distributed close to Rs 1 crore worth of dry ration all over Goa without much publicity )
Sr Fatima is the person who I can call, meet, discuss,  share my ideas and she will listen and advice .
But never takes any decision which is music to my ears .
All the decisions are taken collectively by Sr Vandana ( Provincial ) & her councellors.
A lady 1st , who understands hunger & Homelessness and then a nun is what I can say about her .
Does not wear her title on her sleeve but walks the talk .
In her second innings as SUPERIOR GENERAL , our NGO & her Congregation will be adding more projects towards the homeless and the poor sick people with disabilities ( PWDs) in a couple of their homes especially in the field of health care and palliative care .
I am aware that Sr Fatima must be questioned by many to why and how FMCK is collaborating with a small NGO like Street Providence especially after early 2020 when our NGO was totally asked to vacate by force a home in Margao by another religious congregation.
Usually when an NGO gets any bad publicity or something negative pops up, every one shys away from the NGO .
No one wants to be associated with NGOs like what happened in early 2020 in Margao , but FMCK did not back out .
Both Sr Fatima & Sr Vandana were clear that rehabilitation of the homeless would go on.
Today our NGO runs 2 shelter homes for 35 women and the 3rd Shelter Home for women is starting end of this month.
The 4th Shelter Home for women by the beginning of next month.
And it all started by Sr Fatima who believed me
5 years ago over a cup of tea .
I once again wish Sr Fatima a Spirit Filled second tenure as Superior General Of FMCK .
Looking forward to Sr Fatima continued support & care for the hungry , homeless and People with disabilities ( Pwds).
God bless you
Donald Fernandes
8380097564 / 7020314848 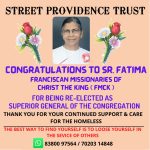