RESCUES AN ELDERLY GOAN MAN PRACTICALLY FROM THE CLUTCHES OF DEATH

5.4 2022. 7pm IST
STREET PROVIDENCE GOA rescues an elderly  Goan  man  practically from the clutches of death only because one young goan girl took the initiative to help him inspite of being threatened with dire consequences .
A few weeks ago , a very young goan girl doing 1st year MSW got in touch with me through whatsapp  and sent me this video .
Attached the video. 👇
https://fb.watch/cdbevBhdjd/
The home was a mess and he just could not get up , leave alone stand.
I was shocked and upset.
I instructed the girl what to do and the police were involved to get him out of the home but since it's 70 kms from our office I did not know the severity if his medical condition at that point of time .
Man is naughty and drinking too much .
Wife expired few months back.
Not listening to his children.
Some have migrated and one married child is here who has been looking after him but the father refuses to give up drinks and goes back to his home where he stays alone .
The child here sends food daily but the spouse is not well and that disturbs the food delivery .
The elderly goan man had been knocked down and had a fracture on the same old fracture and that complicates the issues .
Because the young goan girl helped him to get off that place , one child threatened her with dire consequences.
Anyway we got involved and admitted this elderly goan man into the District Hospital , where the DOCTORS did a fantastic job for over a week,  without we having to keep an attendant
♡♡♡ Thanks to A Head Constable from Goa Police who knew this family and who knew our NGO, all misunderstanding with that young goan girl were sorted out .
The family members requested us with an affidavit to look after him and agreed to help In his basic medical costs .
The elderly goan man has :
☆ A fracture with plaster ,
☆ Is on a caterer ,
☆ Plus pampers ,
☆ Very weak and malnourished,
☆ Has to be bathed. Cleant and fed ,
Still wants to drink
And requires help to get up and has to be held while moving around.
Had to be admitted into our home on a stretcher carried by 4 people .
I was reluctant to take him in  but being a human I had to help .
I was very upset with that young girl as this elderly goan man could have just hit the bucket and the family might have dragged us into controversy.
But all good deeds , thoughts and intentions are taken care by God .
Today it's over 2 weeks , we took him to the District Hospital and took off the plaster but yet weak .
He has a support for his leg and and as such he is standing and attempting to walk a few steps.
I told that young girl please don't bring such cases in the future to us .
It's very tough and difficult handling such medical cases and our homes are stretched to the limit for bed ridden patients.
But where will such pathetic and abandoned cases end up ?
I really don't know and that troubles me more .
One way I want to help , other way the complications,  after care and the legal issues trouble me.
Many are just waiting to create hurdles to stop our work .
If that man was just left there, belive me he would have kicked the bucket as even if he shouts no one could hear him In that small room.
Daily I ask God for Favour, Grace & Wisdom .
If he was a normal homeless man its okay to accept.
Here he has a family and complicated medical issues which can just backfire for no reason at all.
Once again I APOLOGIZE to the young girl for losing my cool that day because the man was almost gone .
I thank and appreciate that young girl may be
20 years max 21 years for going out of her way to help this goan man get another lease of New Life.
If you are knowing any such Goan men who are in need of a fresh lease of life and you can take my PRESSURE at that point of time please  whatsapp me on 8380097564.
We need to reach out and help our elderly who might be in need of help .
It's our nature to help the abandoned and the homeless Pwds.
Thanks alot
Donald Fernandes
8380097564 / 7020314848 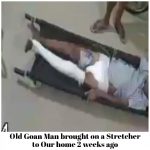 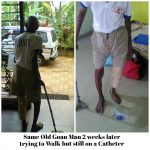