ANOTHER GOAN MAN , HOMELESS AND ABANDONED ON THE STREETS OF MAPUSA .

Street Providence > Updates > ANOTHER GOAN MAN , HOMELESS AND ABANDONED ON THE STREETS OF MAPUSA .

10.12.2022. 7pm IST
Another Goan man , homeless and abandoned on the streets of Mapusa .
This is Nicholas Fernandes from Moira who according to my sources has been living at Mapusa Bus Stand last 10 years .
Aged 67 to 70 years and living last 10 years in the dust , dirt , heat , unhygienic condition has destroyed his health.
Exactly 15 days back we were requested by Mapusa Police Station to rehab Nicholas which we obliged.
Nicholas has been in District Hospital Mapusa for quite some time before we took him into our home.
Has got major internal problems which required him to be admitted into District Hospital by 108 as it can be he was lying on the streets of mapusa .
Since he was being discharged he needed a place to recover and was guided to the Mapusa Police Station who were kind enough to send him to our home .
But with a few days his health started troubling him and we readmitted him into the District Hospital Mapusa where currently he is being treated.
Certain homeless people come with so much of serious health issues coupled with stress and insecurity that it takes a long time to settle down in a shelter home as all their life they have been living on streets and dark areas that something like a shelter home is difficult to digest .
There are many many such homeless men in Goa living a dark and life of misery all in bondage.
We are all tied up in our own bubble that we don't have the time , energy & motivation to stop and see whether any homeless requires a hand to start life again.
And that implies to me also.
At times i too loose that motivation as the main issue is the medical bills and the expenses.
90% of homeless people who we admitt into our shelter home require serious medical help and continous trips to hospitals , follow up, Various tests and continuous assessments.
Taking care of 160 such homeless people as of today is not an easy and feasible service especially when 95% of our friends are homeless & penniless .
As of today close to 12 such friends from our homes are admitted in both district hospitals & GMC for treatment.
We need your help daily to help others on the streets to start life again..
We need volunteers and fellow citizens to spot such genuine elderly homeless Goan people and either get them to a hospital for treatment or to any shelter home.
If we can rehab we will else I am not sure where they can be admitted.
It's getting chill here In Goa and its the Christmas season .
Mos of us reading this post will be sleeping in our warm beds all tucked up .
We need to think and share our thoughts with such homeless people living on the streets as they are abandoned for either their fault or just abandoned because of no family who can care for them especially if they are old & senior citizens.
Please support us in whatever you can as we attempt to end Hunger & Homelessness in Goa.
God bless you so much
Donald Fernandes
8380097564 / 7020314848 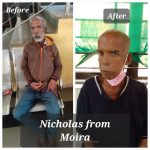