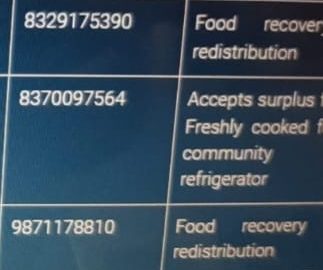 PART 1
26.10.2022  7 pm IST
On 14th October, FOOD BANK FOR THE POOR staged a silent sit out at Azad Maidan  against food wastage in Goa as FSSAI is not taking any initiative to stop the wastage. And subsequently  FSSAI got moving .
Moving only 10%.
Today an advertisement / notice was put in the local newspapers  calling attention towards our fight against hunger.  ( Attached the advt )
Madam Director I thank you for taking one step.
But it's just not enough , for these 5 QUESTIONS :
☆ 1. Why is it that  the names and phone numbers of the registered partners are not put up in the advertisement?
☆ 2. The advt states  that the registered partners will collect the food ? Who will pay for the costs involved  is not clear?
☆ 3. The advertisement is not insisting that the  food points having excess food  attend the meeting so if no one attends then what ?
☆ 4. The advt is requesting citizens to be  responsible to the needy by donating food to the registered partners.  is this a joke ?
☆ 5. Why is the Government not told to avoid food wastage at all government functions and events?
My ANSWERS  to the above 5 questions:
☆ 1. There are only 3 registered partners on the FSSAI site including our NGO .
Of these,  two phone numbers when called do not connect and the message received says “out of service” etc
Our NGO phone number  is entered wrongly.
Attached  please find  two small 10 sec videos of the response received when  one  calls the  two numbers on the FSSAI website
☆ 2. On the official FSSAI site our NGO has registered as :ACCEPTS SURPLUS FOOD – we accept surplus food, we have not registered to collect extra food that's why we have fridges across Goa – to ACCEPT EXTRA FOOD .
Attached proof of our registration on FSSAI site.
Because there is a huge cost to collect extra food that's why we explained in person,  wrote letters, had meetings asking for support from companies to give us their extra food with a small charge.
No one will collect food at their cost and feed the poor daily in Goa 24* 7 * 365 days .
We are the only NGO collecting food daily on a small scale for the  last 5 years with our own Infrastructre and investment.
Because we can't afford the costs of collecting 5000 kgs daily food we are asking help from  FSSAI and no is listening or is interested to listen .
☆ 3. The advt is only asking and not insisting with  anyone from the food industry where daily good food is wasted to attend.
FSSAI must specifically call Food points where excess food is thrown in bins like the
Off shore casinos ,
the big factories having more than 1000 employees ,
& the big 5 star hotels about 30 in total
These put together waste approximately 5000 kgs daily .
☆ 4. Since the last 5 years,  the citizens of Goa have been very responsive & responsible ( but not the FSSAI ) towards saving food  and take the extra effort to put it in our Food banks fridges across Goa  and I am grateful for that.
Did any time FSSAI Bambolim issue any notice to save food through our fridges in any newspaper?
☆ 5. At All government functions , food contract /catering is given out to private entities. At the last minute, we are called to pick up the extra food  and sometimes it is next to impossible due to various logistic reasons.
FSSAI should issue an order stating that all major Government events  inform  our NGO 24 hours in advance so that we can be prepared to pick and move the food .
FSSAI needs to be a little more PRO ACTIVE and listen to people like me with only 5 years experience on the ground to how to run this project in Goa .
Since we are the only GOAN food bank doing this work, FSSAI should issue a note to all government departments for all Government events not to waste food .
I clearly remember the FSSAI representative from DELHI In March 22 stating that   FRIDGES IN POLICE STATIONS will not work out  and today  FSSAI GOA is asking me for details INFORMALLY  about where our fridges are located.
Please note our FRIDGES & infrastructure is for our daily collection of food which can be capped at only 500 kgs a day .
FSSAI should be the responsible authority to create infrastructure for extra food wastage and not use our infrastructure to hoodwink the system by showing that food is being saved in Goa already because of the FSSAI INITIATIVE
Last understand that extra food is being thrown out because the concerned officials are too busy with other duties .
Why should poor people go-to bed  hungry & the garbage dumps get over loaded?
To the concerned officials ” how do you get sleep at night when food is being wasted “?
All I am asking is  for a dedicated officer FROM FSSAI who understands hunger and poverty to head this project as the DIRECTOR can be occupied with other important duties.
Togther it can be a big success where thousands of kgs food can be daily saved and thousands of meals fed daily to the hungry across Goa.
We will be forced to :
☆ Petition the Governor,
☆ Have another protest with 100 + homeless,
☆ File a PIL &
☆ Even Petition the Prime Minister.
The fight is against the food wastage in Goa and not against any individual or entity .
It's FSSAI INNIATITVE and nothing is being done on this for the last many years .
We need to all work together towards feeding the hungry and the homeless.
God bless you all
Donald Fernandes
8380097564 / 7020414848
To follow Part 2 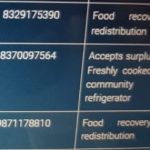 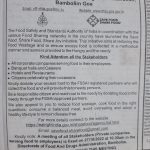