GETS HELP TO THIS ABANDONED HOMELESS MAN WHO HAS PRACTICALLY LOST HIS MIND .

Street Providence > Updates > GETS HELP TO THIS ABANDONED HOMELESS MAN WHO HAS PRACTICALLY LOST HIS MIND .

Today we celebrate World Mental Health Day .
10.10.2022. 7Pm IST
This post will surely touch many Doctors , nurses , staff. Police personnel and people who have visited GMC hospital last many months as we celebrate World Mental Health Day today .
Street Providence Goa gets help to this abandoned homeless man who has practically lost his mind and was living for many months if not years right in the compound of GMC in a very unclean manner .
Just last month of September he was spotted in a compound outside / at the entrance of a residential building behind Hotel Kadamba Ferns, old Goa .
I can surely say this man has not walked from GMC to old Goa . It's impossible.
The sad part is I too walked away from helping him many times as I too saw him in the vicinity of GMC as he was too violent as I waited for the GMC management to help him .
But finally I just could not stop feeling that guilt of getting help to him permanently and last week our team picked him up and admitted him into IPHB for treatment and once okay he will be rehabilitated in our shelter home.
It pains me that no one from GMC including the top brass got him off their premises into the IPHB which is just next door.
Even the Police outpost @ GMC looked the other side.
This man would whole day be sleeping in the lawn/ garden of premises and at night would be spotted at the temple in the GMC sleeping .
A doctor from GMC who resides in this residential building behind Hotel Kadamba Ferns called me a few days back saying to please help In his rehabilitation. ( video attached)  👇
https://m.facebook.com/story.php?story_fbid=pfbid02vX7Bh9oYshitSwGeQHrZEGZJuDPjBQL36uqz4Y7DmvLTaes1WWuJXH1NM7vUhBvkl&id=1239769299485483
Old Goa Police was informed and they deputed their personal.
The point to be noted here is ” we did not use the MAGISTRATE ORDER to admitt him but we admitted him directly as we reassured the IPHB that on discharge he will be taken to our home “.
If the MAGISTRATE ORDER was taken then :
1. The police on his discharge would allow him to go away and without medication he will be back on the streets as there are no government designated homes in Goa for such people to recover and rehabilitate .
2. Since he might not be able to tell his address and details, he might be kept for a longer period of time which can be months if not years in IPHB itself as he was brought through the Magistrate Order by Police.
But by our NGO admitting him, say within max 2 months once discharged from IPHB  , he can be stabilised further by rehabilitation at our homes where medication & nutrition will play an important role is his well being .
Our personal experience with close to 15 such men in similar situations makes me write this .
He will take atleast 2 full years to get back to 50% of his capacity but that depends on his medical part.
Being in that situation as you see him In the video attached also could make him a patient suffering from TB as he is totally weak & malnourished.  This is my observation.
But TB is curable and controllable and we have had many such homeless men before with similar symptoms of being mentally unsound and suffering from TB and we have taken them into our homes .
At times we all just walk away with our own lives saying and thinking ” let someone else help “.
In the coming days I will upload how such men living at bus stops , eating from dustbins , walking up and down the whole day for years,  today are back to being 75 – 80 % normal human being all because of timingly administering of their daily medication in our homes.
Else it's a lost cause.
Not an easy task handling such highly chronic and complicated cases day after day , month after month,  year after year but some one has to step in when the authorities close their eyes saying it's not our job .
Our NGO has chosen this service last 5 years and we do exactly that ” helping the street people get off the streets ” especially those suffering from all types of mental disabilities.
Your support is what matters .
It can be prayers, good wishes , your donations or even just forwarding our posts so that incase there are other such cases in Goa we can be contacted to help .
It's only through whatsapp on 8380097564 and no calling please .
As the day ends let's get together in Goa and reach out to as many as possible who are suffering from any type of Mental disabilities.
We can always take in as many as are there in Goa and on the streets suffering like this man .
God bless you so much
Donald Fernandes
8380097564 / 7020314848 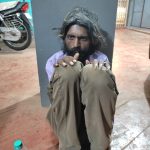