23.9.22. 5pm IST
Ravi a middle aged man from Navelim has stayed/ admitted/ lived in government hospitals for the last 4 years, abandoned and alone as he suffered a stroke 4 years ago and can't walk .
Two months ago we received a call from
Mrs Dr Deepti Furtado @  TB Government hospital stating that there is paralyzed man in TB hospital but not having TB and is homeless and having no one, please help .
At 1st since he was bed ridden and paralyzed I tried to ignore this request as to look after such a case is not easy and we are already having many such cases .
But then something started telling me ” have a look at him “.
So I sent my Quepem team ” Mr Akash &
Mr Akshay ” to meet the boy 2 weeks ago .
Totally paralyzed left side.
Ravi was / suffering from fits and used to take medication.
But due to stupidity he started consuming alcohol too .
Resulting in a severe Stroke .
Attached a small 60 sec video and a picture of him . 👇
https://fb.watch/fJw8UOhIt3/
Married man but wife left him with his two small sons after the stroke and surely will not want him as he is totally bed ridden.
Infact on 13.8.22 , Ravi had made a letter to Fatorda P Station stating that incase he expires in the hospital, his body should be disposed off through the hospital authorities. Copy with me.
Looks like Ravi had given up hope that the World never wanted him.
But that's the same time I was inspired to take a look at this boy by the Holy Spirit of God .
For the last 4 years Ravi has been admitted In :
Gmc
District Hospital
Many health centre across South goa
Back to District Hospital
& finally admitted at TB Hospital .
This is the scenario most of the times when homeless are admitted and recovered and have no place to go .
It's only when a certain doctor will call us then these Homeless will get proper home at our NGO.
And that certain Doctor in this case was Dr Mrs Deepti Furtado from TB Hospital Margao .
It's sad and disappointing at times.
No one takes in such cases except us and that free of cost.
And we are practically taking them every month last few years .
Ravi is not going to be easy to handle as it's really difficult, complicated and tough but we can try to do the little we can to help.
This is where our FREE Physiotherapy centre comes in .
We have many such paralyzed homeless street men & a couple of woman in our homes and Physiotherapy is what helps them to a great extent to recover at times.
Like Ravi I am sure there are many many such homeless people in various Government hospitals and its upon the Dr incharge of that hospital to keep or to discharge.
Discharge means going to a shelter home or just going no where which may be back to the streets,  bus stops,  gardens, etc .
We feel happy and blessed that we are able to help a few of these such homeless people in the last 5 years and counting and the support we receive through our benefactors is what makes these services possible.
Funding / Donations are very important to provide such services where really pathetic and lost cases are Given a second chance to live .
And Ravi is just between the age group of 30 to 35 years .
Please do bless us with your prayers, wishes and your support in many ways which you can .
God bless you so much
Donald Fernandes
8380097564 / 7020314848 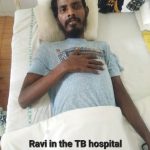