A BIG THANKS TO THE HEALTH SECRETARY , GOVERNMENT OF GOA. Mr Y.V.V.J. RAJASEKHAR , IAS

29.3.2022. 7pm IST
♡♡♡ A big thanks to The Health Secretary , Government of Goa. Mr Y.V.V.J. Rajasekhar , IAS
for supporting the homeless In our homes through the Directorate of Health Services.
As an NGO looking after homeless street people, many people ask me or must be wondering how do we manage such numbers especially with their health.
We @ Street Providence Goa , thank the Health Department, Government of Goa for all the support provided in the last 5 years.
♡♡♡ A big thanks to Health Secretary & Director of Health Services , Dr.Ira .
Most of our homeless who get sick require admission at times in Government hospitals.
That's not the issue.
The issue is an attendant to be kept.
Keeping an attendant with the patient has been a long running battle and problem which we have had last 5 years .
1st of all we have 2 to 3 good men in each home to look after 15-20 other men.
Keeping an attendant with the homeless In the hospital means every 12 hours one man has to be shifted .
Sending two men out every 12 hours means one pilot has to drive them up and down plus send food .
We can't afford to hire attendants as they charge Rs 1500 to Rs 2000 per shift and at any point of time we have minimum 3 inmates admitted for treatment.
As of today, just now we have 2 men admitted in GMC & 1 man in District Hospital Margao.
Of which Two of them are Person with disabilities ( PWD )
Any one can verify tomorrow if needed.
Plus daily new admission happen in our homes which require our care givers to take care off.
From last month , because of an order issued by DHS ,  without any  attendant the homeless person from our NGO gets into the Government hospital for treatment and hospitalization with much ease and comfort.
Very good move by HEALTH SERVICES @ Government of Goa .
Our team members have the order , which they produce to the hospital , admission happens within 30 min.
Before our team leaves the hospital,  Police call me as these cases are registered under MLC.
Such a superb system where there is no time wasting , arguing,  phone calls etc .
For close to 5 years , I went through a very tough time treating homeless in hospitals and in due course I often ended up fighting with Doctors .
But today Ira different.  Hospitals trust our NGO.
We are now more than happy to take all types of homeless people off the streets with proper procedures irrespective of their medical condition as the Government hospitals will now admitt and treat them and we will accept them back into our homes.
We also take homeless people from all types of Government hospitals if the request comes.
We have assured the department and the Director of DHS that if there are any homeless people especially men in any PHC / UHC / DISTRICTHOSPITAL , we will rehab for free whether we have admitted or if they were brought by the Police.
Win win situation to our NGO as well as the Government.
” Because we have volunteered to take from DHS all types of homeless abandoned people ( which we have been taking last 5 years ), this order has been issued / granted/ given in our favour ”
That's why off late we have started taking so many homeless people on a daily basis irrespective of their condition.
As the only NGO in GOA  picking up homeless people non stop last 5 years from hospitals,  police stations,  streets,  etc this support from the Government was much needed and I am glad that we have earned this order without any political pressure .
We don't have ANY POLITICAL GODFATHER.
It's our work which stands out and our commitment to the homeless especially the PEOPLE WITH DISABILITES ( Pwd) .
It's my dream to eradicate the Homelessness from Goa irrespective of the no. of people on the streets and this is only possible with the support of various Government agencies.
If I can link the system of  :
☆ Goa Police
☆ DHS ( Health services)
☆ IPHB & GMC
☆ W&CD ( women & child dept )
☆ Provedoria
☆ Social Welfare ,
( Poster attached ) ( this is the plan )
then surely we can achieve and make GOA HOMELESS FREE .
All we require is two nodal officers Government appointed to make this dream a reality .
Today our NGO has managed to only work with
Goa Police
DHS ( Health services).
Social Welfare
Other government departments In the poster are taking time to complete the circle / link .
Once again , I  especially Thank :
Dr Ira, Director of Health services &
Health Secretary of Goa Mr Rajasekhar IAS
Not to forget the doctors at DHS / GMC / IPHB who support my dream of rehabilitating the homeless and those with Disabilities.
God bless you all
Donald Fernandes
8380097564 / 7020314848 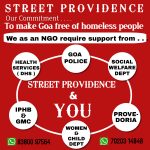