14.9.2022. 11am IST
It's raining last few days in Goa and this old man has been sleeping on the foot path in panjim city which caught the attention of Mr Muktar Sheikh who requested us @  Street Providence to rehab him .
Yesterday we picked him up and took him to our home.
He has been sleeping on the footpath last few weeks and not disturbing anyone.
Attached a 1 minute video 👇
https://fb.watch/fxGSqutc3t/
Had a fever last few days and Mr Muktar has been giving him medicines.
This old man has been troubled at night for money by rowdies and has been at times being beaten up.
That's the sad part of being old , homeless,  sick and then harrased and beaten on the streets by younger men who rob and harass such old and sick homeless people.
Muktar Sheikh really got behind me yesterday to help this old man .
It was a really tight day yesterday and we just could not squeeze time to pick this man up but Muktar went on calling every 2 hours asking when will our team reach.
Muktar understood the homeless mam plight and he wanted him off the streets as soon as possible.
Man is quite old , stressed and sick .
We at times really can't make it due to prior work, shortage of manpower , pending hospital trips of other patients in the home .
Once again We thank Muktar Sheikh who works for Adv Carlos at his office which is in the vicinity of Keni Petrol Pump panjim for getting help to this homeless man and following up with  me inspite of me postponing the time .
We once again assure you that we are committed to picking up and caring for genuine homeless people and not those people who are laid off / sent away from restaurants and shacks as the season is off .
Lots of people try to feel pity and sad for anyone without knowing their history and try to force us to take such men .
See, homeless are genuine and there is a way to spot and understand the actual homeless.
Waiters , Cooks,  kitchen helpers once given a break from their season line should go back to their native place and rest .
We have had very bad experiences of such type of people staying in our homes till the season starts and then taking away our good rehabilitated manpower and then calling late nights once drunk and threatening our staff , care givers , even at times giving me missed calls late night.
These laid off waiters , Cooks,  kitchen helpers when admitted in the past just don't do any work in the home , want non veg food , try to leave the Shelter home in search of alcohol and tobacco.
And when confronted they argue that
“we did not want to come for rehabilitation but this uncle/ that aunty has forced us to stay “.
So anyone reading this post , please always route such homeless people to the local police station.
Let the police decide which shelter home they should be admitted or they should be sent back to their state where they belong too .
Please do support us in whatever you can .
God bless you all
Donald Fernandes
8380097564 / 7020314848 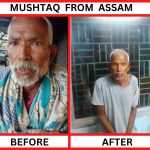